Do you have bloating or gas? It could be SIBO 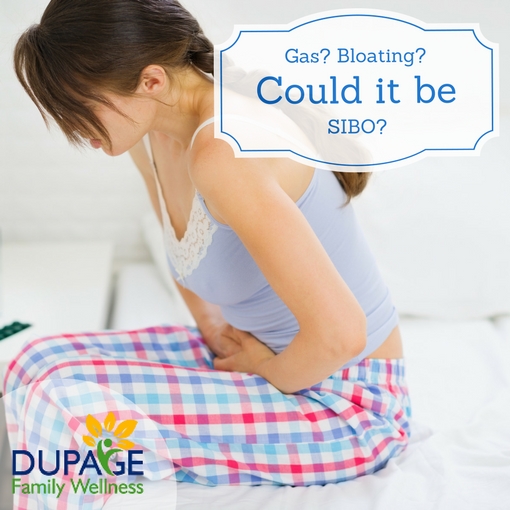 What are the symptoms?

The most common symptoms of SIBO are

What leads to SIBO?

This question is still controversial, but one of the main mechanisms that I have seen is a decrease in stomach acid. This causes bacteria that would normally be killed in the stomach to make it to the small intestine. This is common, especially in those that take acid reducers for heart burn.

The other mechanism is a translocation of bacteria from the large intestine, where they normally live in higher quantities. This occurs for many reasons including motility problems in the intestines and failure of the valve between the small and large intestine.

Additionally, many medications and conditions are risk factors for developing SIBO. These include diabetes, irritable bowel syndrome, alcoholism, prior bowel surgery, Crohn’s disease, Celiac disease, increased age, taking multiple courses of antibiotics, and people who consume a diet high in sugars and starches.

A bit more about IBS:

Irritable bowel syndrome is now as common as 10-15% of people. There is often no cause pinpointed, and people suffer from symptoms for years. Depending on the study, SIBO is present in 35-80% of cases of IBS. SIBO is often the root cause of the IBS. Check out this article for 6 signs that your IBS might be caused by SIBO.

What happens when SIBO goes untreated?

Untreated chronic SIBO can lead to other problems including:

How do you know if you have SIBO?

The best way to determine if you have this overgrowth is to do a breath test. During this test, you take a specific amount of a fermentable sugar before breathing into sample tubes every 20 minutes for 3 hours. These are then sent to the lab to determine the gasses (hydrogen or methane) which result from the fermentation are present.

My first recommendation to patients that have the symptoms listed above, is to switch to the healthy real food diet that I teach in Wellness Warriors Nutrition Bootcamp. If they are already eating this diet, and still are suffering, I will go ahead and have a breath test done to make sure that this isn't a contributing factor.

How is SIBO treated?

Unfortunately, diet alone is not enough to get rid of the overgrowth of bacteria when it is present. The recommended treatment for SIBO is an herbal antimicrobial protocol or an antibiotic protocol.

The low FODMAP diet is often recommended for people that have digestive issues, including suspected SIBO and IBS. Although they may find short term relief on this diet, I do not recommend it as a long term solution. On this diet, many foods beneficial to the flora of the large intestine are cut out. While it might help the small intestine in the short term, we don't want to sacrifice the long term health of the large intestine!

If you are eating a healthy diet and still feel like your digestive system isn't functioning properly, it could be SIBO. If you are suffering from the symptoms listed above, I am happy to help you get to the root of the problems! While these symptoms are "common" it doesn't mean that they are "normal".

If you have any questions about this, let me know!! I can be found at This email address is being protected from spambots. You need JavaScript enabled to view it. or on my facebook page

We treat the whole body!

Any part of the body can have pain, strains, sprains,  or weakness. Call today so we can help you live the life you love.