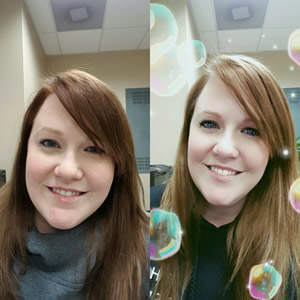 Karrie participated in the January Wellness Warriors Group. During the 6 weeks of the food changes, she lost a whopping 20 pounds. She has stuck with most of her changes, with a few reintroductions, and is officially down 34 pounds since the program began! The picture shown here on the left was taken December 23, and on the Right was taken on February 21. What a difference! Here is what she had to say!

How are you feeling after participating in Nutrition Bootcamp?

"Where do I begin? My hair, skin and nails are amazing! I wake up feeling well rested and ready to start my day! Whereas before I felt exhausted all the time and used copious amounts of coffee as a crutch. Now, I have maybe one cup a day. I have less brain fog and feel more focused on things. Also, I don't feel bloated or weighed down and sleepy after I eat. Furthermore, I don't crave sweets after meals and my taste buds have changed. Over the course of 7 weeks, I have tried so many new foods and have found a love for cooking again. I could go on and on! I will leave you with the fact that I feel so good and so energized that I started going back to the gym again."