Are GMO's Safe to Eat? 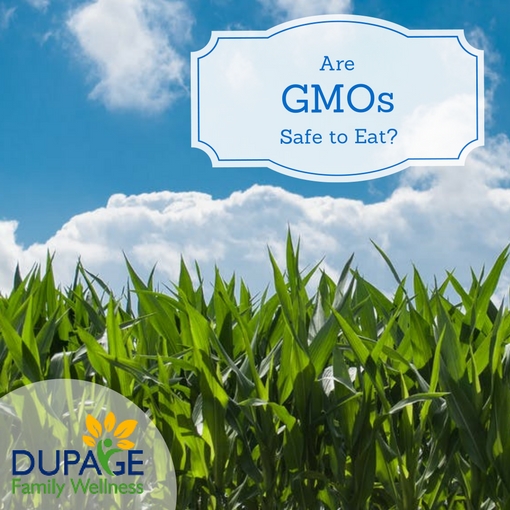 Recently, I have had several questions from patients and people in my nutrition bootcamp program about GMOs.

What is a GMO?

GMO stands for Genetically Modified Organism. This is an increasingly popular topic in the news. There is controversy over labeling of genetically modified products.

Many people believe that GMOs are the simple cross breeding of plant species that farmers have been doing for years. This is NOT the case. Current procedures for making genetic modifications are high tech and sophisticated techniques like gene-splicing, rather than the natural, low-tech methods of cross pollination.

Are GMOs safe for human consumption?

One of my main concerns with GMO foods is that there are few studies (especially anything long term) on how they impact humans. My philosophy is to keep our food simple, go back to the basics, and eat foods more like our great grandparents ate, rather than processed food invented within the last 75 years. Clearly genetically changing the makeup of vegetables (and in the pipeline they are working on creating GMO animals as well) does not fit in with this philosophy of back to the basics old and simple foods.

The rearrangement of genes can create new proteins in the plants that may trigger allergies and promote inflammation and disease. If these unrecognizable proteins make it into the blood stream, they could potentially lead to changes in the gut and the immune system.

There has been research on animals showing that eating GMOs has led to problems with the liver, kidney, adrenal glands, heart, spleen, and decreased ability to reproduce. Additionally many farmers that work with GMO plants complain of rashes and allergies after working with these crops. On the other hand, other studies have come out concluding that consuming GMOs had no health risk and were safe.

There is inconsistency in the research and credible studies are sparse. Unfortunately much of the research is funded by companies that have a financial interest in creating and using GMO species. If you are interested in a review of the research, here is a great summary of research on GMO's.

WHY are GMOs being created?

Like any other new technique or process, I believe it is important to consider the motivation driving it.  Why do big companies spend top dollar to create these modified organisms?

At this time, companies are creating crops that are resistant to pesticides and herbicides! When these GMO seeds are used, the fields can be doused with pesticides and herbicides to kill the weeds, without harming the crops. Even if the genetically modified organism itself isn’t dangerous to consume, I don’t want to consume plants that have been generously sprayed with chemicals.  For example, Monsanto has created a line of seeds to grow Roundup Ready® crops.  Scroll thru the years on this map to see how the amount of glyphosate (aka Roundup) has increased in the past 25 years.  Here is an article discusses how the problem may not actually be the GMO, but the use of pesticides sprayed on the crops.The same company sells the GMO seeds and the pesticides - a package deal!

How do I know if a product is genetically modified?

In Europe and South America  strict laws specify how genetically modified foods must be labeled. The United States does not require genetically modified foods to be labeled. Legislation in our country has been introduced, but it has not been voted into law. I don't want to get into the politics of this issue, but if you have watched any of the food documentaries, you have probably seen that many of the policy makers in the US government and the top position holders within the FDA and EPA are previous employees of large companies creating GMO products. These companies have a lot of money and fund campaigns for both democrats and republicans to help ensure that legislation is passed in favor of their business.

What products are most commonly genetically modified?

Besides some papayas, most fruits and vegetables sold in the US are not genetically modified at this time.

Keep in mind that the use of corn, soy, and canola goes beyond corn on the cob, soy products, and plain canola oil. If you take the time to read ingredient labels, you will find corn, soy, and/or canola oils are in most all processed food products in the center aisles of the grocery store. This is one more reason for you to avoid buying and eating these "foods"! The following list of companies tells how much each company spent to lobby against GMO food labeling laws. If they spend a lot of money to avoid labeling their products, I’m guessing it is a safe to assume that they are using GMO foods in their products.

In addition, many farm raised animals (chickens, pigs, beef, and fish) are fed genetically modified feed. It is unclear if this is impacting us directly or not, but for me this is one more reason to keep moving towards finding animals that were able to eat their natural diets while alive!

If you want to learn more about GMOs, check out this documentary produced a few years ago called Genetic Roulette.

What About Seeds for your Garden?

Types of seeds include:

Hybrid Seeds:  These are created when plant breeders intentionally cross-pollinate two different varieties of a plant. The goal is to produce an offspring, or hybrid, that contains the best traits both parents. This is a natural process that occurs within members of the same plant species. The pollination is carefully controlled when when hybrid seeds are developed, and the process can take many years.When hybrid seeds are used, they produce consistent, uniform fruit. If seeds are collected from the harvest, next year's crop may get a mixture of inferior characteristics.

Heirloom Seeds:Most heirloom seeds are usually over 50 years old, and come from seed that have been handed down for generations in a particular region or hand-selected by gardeners for a special trait. They are open-pollinated, that is, pollinated by insects or wind without human intervention. The vegetables tend to remain stable in their characteristics from one year to the next, and can be safely saved for your next year's crop.

GMO Seeds: GMO seeds are used by farmers, and seeds sold for residential gardens are typically not GMO seeds. These are the result of genetic engineering, a process during which the plant’s DNA is altered in a way that cannot occur naturally. Sometimes includes the insertion of genes from other species. As a note, when a company creates GMO seeds, they have a patent on the seed, and it is illegal to collect seeds from your crops to use for next year's planting. This means that farmers must purchase new seeds each year in addition to the pesticides and herbicides that have been created to work with those seeds. This dependency on the large corporations has put many rural farmers out of business.

It's hard to tell if foods grown from GMO seeds are safe, but I'd rather be safe than sorry. The safety could depend on the particular modification. Even if the GMO itself doesn't cause problems, I don't like the idea that most are created to be sprayed with chemicals. Currently most GMO crops are used as ingredients in processed foods.  Lucky for us, if you eat the way I recommend, you will avoid GMOs!

Hope this was helpful! If you have any input, or would like to discuss this further, head on over to my facebook page and write a comment there!