What is Gluten? Should You Eat It? 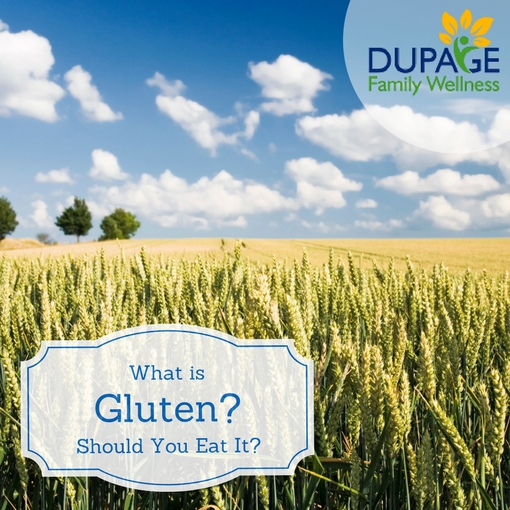 Gluten is a protein that is found in wheat, rye, and barley. It helps to create the elasticity in dough. Because of this feature, it is added to many processed foods, including soups, candy, sauces, and even lunch meats.

There are two conditions in which people don't handle gluten well.

First of all, there is Celiac Disease which is a true allergy to gluten. People who have this autoimmune condition should avoid gluten for the rest of their lives. It can cause all sorts of symptoms (over 200 symptoms) including digestive symptoms, low energy, malnutrition, anemia, depression, ADHD,  arthritis and more.  People with Celiac disease have severe reactions to the smallest amount of gluten. Gluten is so common in the standard american diet, that more than 80% of people who suffer from this condition don't actually know that they have it! Most of them simply feel bad most or all of the time, and don't understand why. This study randomly tested almost 8000 individuals for Celiac disease.  35 (1/141) were found to have Celiac disease. Of these 35, 29 had not been previously diagnosed. There is no known treatment for Celiac disease except to permanently avoid gluten.

The other condition in which people don't handle gluten well is called gluten sensitivity. The problem with this is that there is no agreed upon lab test to screen for this. Because of this, many health care providers and people in the media argue that it is not a real condition. A food sensitivity reaction is different from a traditional allergic reaction in that symptoms aren't typically immediate, but can often be delayed by many hours, or even 2-4 days after the intake of the food. The symptoms of a food sensitivity can be quite variable, as well, ranging from digestive problems like constipation, diarrhea, gas, and bloating, to fatigue, depression, joint pain, and skin conditions. Because of these factors, they can be very difficult to pin down. Here is an article explaining more about Celiac disease and food sensitivities. While gluten itself can be problematic for people, this article explains how there are actually many other components of wheat and other grains that can be reactive, and most of these will be missed by traditional testing leaving people to think they don't have any issues. Additionally, 30-50% of people who are sensitive to these parts of grains also react to other foods like dairy, eggs, and even coffee!

Here is another study  that I found interesting. Researchers took people who get irritable bowel symptoms and randomized them into 2 groups (gluten and gluten free). They gave each group 2 slices of bread and one muffin each day (either containing or not containing gluten depending on group assignment). At the end of the study, the gluten free group had significantly lower overall symptoms, pain, bloating, satisfaction with stool consistency, and less tiredness.

What is the bottom line? Whether you fit into one of the above groups or not, there isn't anything in gluten that any of us need. This means that nobody would suffer from eliminating it from their diet. I do think there is a right and a wrong way to do this!

What Is the Right Way to Go Gluten Free?

I bet you can guess which I think is better! That’s right ... Eat foods that are naturally gluten free! Go to the produce section, the meat section, grab some healthy oils, maybe a few nuts, and you’re good to go! Don’t even swing by the “gluten free” aisle. Many of the substitutes used for gluten will cause the same problems that gluten causes, will spike your blood sugar, or are just highly processed and contain lots of ingredients that you don’t want to eat!

They are Sneaky! What Unsuspecting Foods Might Contain Gluten?

I got this list from www.glutenfreegirl.com. This blogger has Celiac’s disease and must be careful not to have ANY gluten! She has some great recipes and advice!! Foods in this list are in addition to the obvious wheat based products including beer, bread, cake, cereal, cookies, croutons, gravies, and pasta.

Gluten can also be in lipsticks, make up, shampoos, and gluten is even used as a filler in medications!

What If I Want Desserts or Baked Goods?

There are alternate flours, including coconut flour, almond flour, and cassava flour to name a few, and lots of recipes on the internet that use these. Here is our recipe for Gluten Free, Grain Free Berry Cobbler. and more information on using Cassava flour. Looking online there are many recipes available.

Although I recommend cassava, or other grain-free flours for the occasional grain free, sweet treat, it is still something to avoid as an every day part of your diet, as discussed in the previous article on moderation.

If you follow a real food, nutrient dense diet like I recommend, and you do not have Celiac disease, you probably don't have to worry about consuming minor amounts of hidden gluten because the "real foods" that I recommend don't contain it! If you do have Celiac disease or gluten/wheat sensitivity, you will likely feel much better if you pay attention to the list above and strive to avoid both obvious and hidden gluten sources.

Do you have any questions? Do you want to talk to Dr. Jamie about testing for Celiac disease or wheat sensitivities? Give our office a call at (630)448-0255 or simply reply to this email!