For Just a Few Minutes After Birth: The Benefits of Delayed Cord Clamping The moments after birth are amazing. You finally get to meet the precious little life that your body has brought into the world. In spite of the exhaustion from the intensity of labor and delivery, holding your baby in your arms for the first time makes it all worth it!

Ideally, these moments will provide mom and baby time together to bond. This may include skin to skin contact and the beginning of the nursing relationship. It is an exciting time for dad and other loved ones as well, as they can now become more involved with the baby’s care.

As the baby adjusts to the world outside of the womb, it is important to honor this transition. One way we can honor the transition is through delayed cord clamping, which allows the baby to receive all the benefits available from the umbilical cord and placenta.

Many people give little thought to the incredible jobs of the umbilical cord and placenta, but they are such crucial roles in the well being of the baby. They work together to provide functions that the baby is not yet able to do one their own.

The umbilical cord is the direct connection between mom and baby, throughout the pregnancy. A vein in the umbilical cord brings nutrient-rich oxygenated blood from the placenta to the baby, while two arteries take carbon dioxide and other waste from the baby to be purified in the placenta.

Since the early 1960’s, it has been standard for doctors to cut the cord seconds after birth.

This is done by clamping the cord in two places and cutting it in between. A small part of the cord remains attached to the baby’s belly button until it dries up and falls off a couple weeks after the birth.

It was thought that early clamping would prevent postpartum hemorrhaging in the mother. This belief has since been disproved, but this practice has remained common even today despite evidence that delayed cord clamping may be really beneficial to the baby.

Delayed cord clamping simply means not clamping and cutting the cord immediately after birth. Some sources recommend waiting at least 1-3  minutes after birth, while others recognize the benefits of waiting until the cord is done pulsating.

Mark Sloan, MD, author of Birth Day: A Pediatrician Explores the Science, the History and the Wonder of Childbirth, explains that at birth about “one-third of a fetus’s blood supply resides in the placenta. In the course of labor and delivery, much of that blood is transfused from the placenta into the newborn, driven by the force of uterine contractions (but) transfusion continues beyond the moment of birth.”

Delayed cord clamping enables the transfer of blood to be complete, and provides the baby with approximately three more ounces of blood. Sloan says, “this is equal to the volume of blood that will be needed to fully perfuse the fetal lungs, liver, and kidneys at birth.”

Other benefits of delayed cord clamping include: 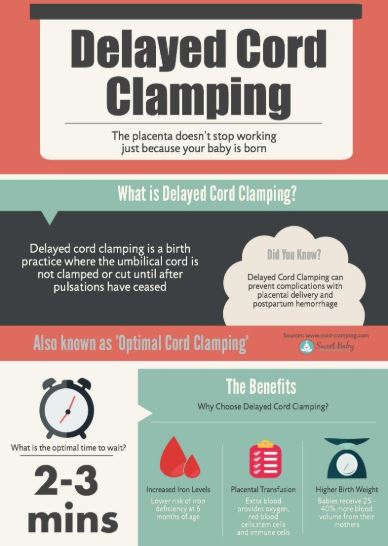 Many professional organizations are beginning to recommend delayed cord clamping.  The American College of Obstetricians and Gynecologists recommends waiting at least 30 to 60 seconds for healthy newborns.

The World Health Organization (WHO) recommends a delay of 1–3 min after birth to cut the umbilical cord, explaining that essential neonatal care can begin before cutting the cord.

The Royal College of Midwives takes it a step farther explaining that while “delaying for even one minute is a welcome change... transfusion is known to continue during the first 3-5 minutes of life.” Therefore they suggested allowing this process to be completed without interruption.

Are There Any Risks?

There is some thought that delayed cord clamping could increase the baby’s risk of jaundice, but the jury is still out on this concern. One analysis found that babies who received later cord clamping had 2% higher cases of jaundice, while another study found no statistically significant increase.

According to the Thinking Midwife, “The only studies available involve the administration of an artificial oxytocic (syntocinon or syntometrine) in the ‘delayed clamping’ group. IV syntocinon is associated with jaundice. Therefore, it could be the oxytocic making a difference here – not the clamping.”

Since treatments for jaundice are widely available in the US, many people believe the benefits of delayed cord clamping exceed this small risk.

Doctors in a Hurry

With all the benefits and such little risk involved with delayed cord clamping, you may wonder why it is not the standard procedure in every birth. In addition to a simple lack of knowledge, doctors may be inpatient to wait for the cord to stop pulsating.

Some doctors will try to speed things up through a process called “milking” or “stripping” the cord. This is where the doctor pinches the cord by the placenta and runs them the length of the cord, causing the blood in the cord to enter the baby more quickly

This sounds like a reasonable alternative at first, however stripping the cord can result in hematocrit levels (red blood cells) that are too high. Delayed cord clamping is able to maximize a baby’s blood volume without raising the hematocrit level.

The benefits of delayed cord clamping don’t really take that much of a doctor’s time. And a little bit of patience can go a long way for the baby.

Most hospitals in the U.S. practice early clamping, but you can talk with your doctor about the benefits of delayed cord clamping and ask to include it in your birth plan!

My midwife supported our decision for delayed cord clamping with our last baby. After an amazing homebirth, our postpartum care was given with the cord still attached.

Eventually, after about 45 minutes, we cut the cord confident that baby Madison had received the full benefit of this connection!

P.S. Here's a picture of our precious little one before we cut the cord!