The Beautiful Design of the Feminine Cycle 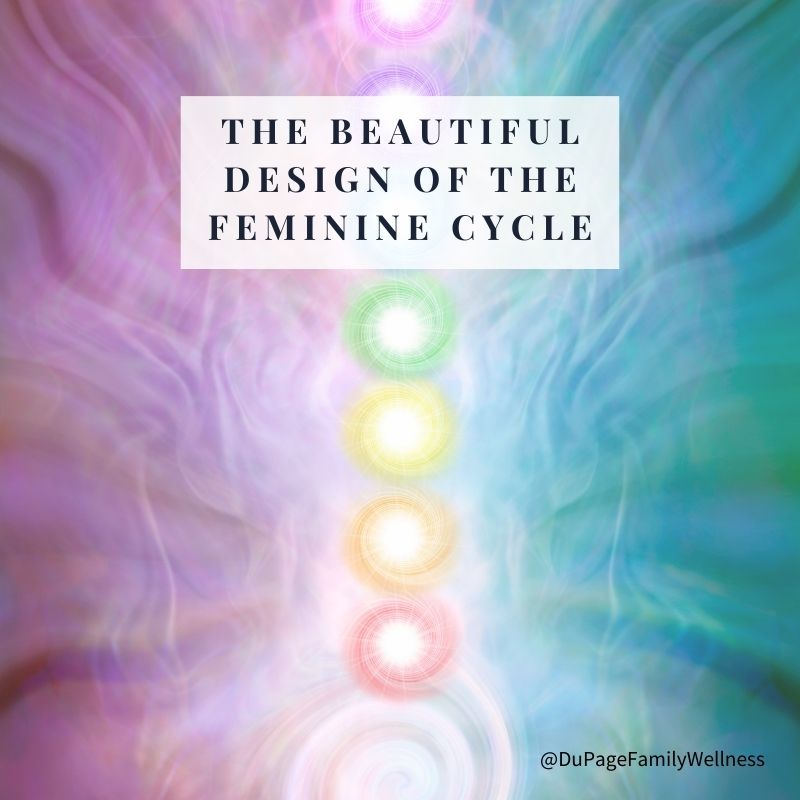 It’s not often that women talk about their menstrual cycle in a positive light. There is often a negative connotation about periods as well as the emotional and physical sensations that are often experienced throughout the cycle.

But when you understand the complicated dance of hormones that’s going on in your body, it’s actually quite amazing and gives you some really important information. I encourage all women to be empowered by understanding their cycle. They can use that information not only to know if they are fertile, but as a sign of health. Let’s take a step back and look at the amazing design of the female body!

What to Expect During Your Period

An average flow for a period will measure around 50ml or 3T over the course of 2-7 days. Anything under 25ml is considered a scanty flow, while over 80ml is considered an excessive flow. (You can estimate your flow knowing that regular pads/tampons hold about 5ml, while super pads/tampons may hold up to 10ml.)

Blood becomes darker when it is exposed to air, so a more rapid flow will produce a brighter red color. As the flow slows down towards the end of the period the flow may become more brownish-red in color. 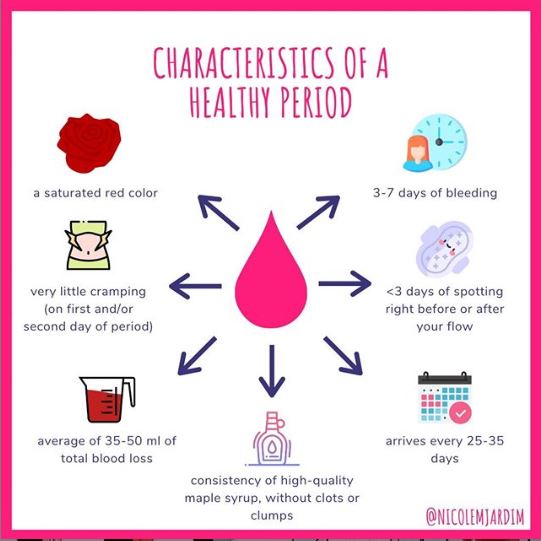 Listening to Your Period

Good normal predictable periods are signs of health. When things are off with them, it is important to pay attention. Listening to what our bodies are telling us through our periods can give us valuable information.

For example, spotting prior to your bleed likely means that your progesterone isn't high enough. And while painful cramps aren’t uncommon, they aren’t normal either and can be a sign of excessive inflammation. These things aren’t necessarily a big deal, but should be noticed.

Our cycle is influenced by what was going on in our lives 3-4 months ago. Sometimes stressful events will give us a funky period. But if your cycle persists in being irregular, let’s talk about it. There are many things that can be done to encourage a healthy cycle and period.

Understanding the Period vs. Menstrual Cycle

As these follicles mature, they increasingly cause estrogen to be released. As a result, the lining of the uterine wall becomes thicker and enriched with blood. Meanwhile the follicles continue their race towards maturity until one (or more) follicle becomes dominant. This results in a fascinating dance of hormones.

The high levels of estrogen in the system first cause gonadotropin-releasing hormone (GnRH) to be produced, which then causes the pituitary gland to produce and release luteinizing hormone (LH). This increase in LH stimulates a brief increase in testosterone.

The corpus luteum, which produces progesterone, will remain if a pregnancy occurs. Otherwise the corpus luteum dissolves, resulting in a drop in progesterone. This drop signals the lining of the endometrial lining to start to shed.

What to Expect Throughout Your Cycle

Since we don’t often talk about menstrual cycles in our society, many women wonder if what they experience throughout the month is normal. I have had women mention that they noticed discharge and thought they might be getting an infection, when what they were experiencing was totally healthy and natural. Let’s take some of the mystery about what to expect throughout your cycle away, so you know what is to be expected and can identify anything unusual that may need looking into.

As the estrogen rises during the follicular phase it stimulates our happy hormones - serotonin and dopamine. This improves insulin levels, quality of sleep, healthy skin, and even increases the libido. This makes perfect sense for a women's libido to rise just before ovulation - the one time a month when she can become pregnant.  Shortly before ovulation there is also an increase of slippery, stretchy cervical mucus which is similar to the texture of an egg white. Cervical mucus is very helpful for achieving pregnancy, as sperm can make it to the egg minutes rather than hours in the presence of cervical mucous. I am constantly amazed by the human body and how it is so perfectly designed.

When I work with women to balance their hormones, ovulation is the main event that we are concerned about. The main signs of ovulation that I have women start to watch for are...

Ovulation is not only an indicator of health, but it is a creator of health. When you ovulate, the follicle turns into the corpus luteum, which starts pumping out Progesterone (pro-gestation hormone). This hormone is crucial for brain health, sleep regulation, bone density, and heart health.  So many women only care if they are ovulating when they are trying to become or avoid pregnancy, but it is critical for female heath in general. Two weeks after you ovulate, you will either be pregnant or have your period. You MUST ovulate for a bleed to be considered a period.

Are Birth Control Pills the Answer to Difficult Cycles

If a woman's period is irregular, painful, heavy, or "off" in some other way, it is important to figure out WHY that is happening and not just hijack her bodies natural hormones.

One of the ways that birth control pills (or hormonal IUDs) work is by giving your body a dose of hormones each day to keep it from ovulating. These hormones override your body's own mechanisms for balancing your hormones. So when you are on birth control you don't get the hormonal ebb and flows like you would in a normal cycle. These hormones released during our normal cycles are critical for long term health.

Since the hormones in birth control keep you from ovulating, the monthly bleed experienced on birth control is not a real period. Controlling irregular cycles through birth control only masks the symptoms - your hormones aren’t really coming into balance and a healthy period is not truly established.

Understanding your cycle and paying attention to it, will give you some really important information about what is going on in your body. Most of the time are things that can be done to balance your hormones naturally.

If your cycle is off, let’s work to get to the root of the issue, not just deal with the symptoms! A great place to start is by joining my private Facebook group “Balancing Hormones Naturally: For Women, Moms, and Those Trying to Conceive.”

* "Characteristics of a Healthy Period" and "The Menstrual Cycle" images were created by Nicole Jardim the Period Girl.