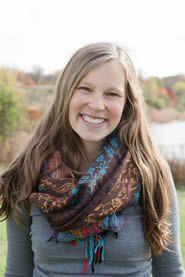 Joelle has always been passionate about eating and exercise. Starting when she was about 16, she began following what she thought was a "good, healthy diet". She ate low fat foods, and did not exceed the recommended portion size. At the same time, she started running, joined the cross country team, and was soon training for marathons.  Too much of what she initially thought was a good thing evolved into disordered eating and over exercising that took a huge toll on her body, both physically and emotionally.

It was her own health issues that re-ignited her study of nutrition and led to her discovery of functional medicine. Her goal was to get pregnant and have a healthy child but she realized that she was hardly able to support her own body, let alone another human being. First she changed her diet to "eat real food". She stopped running, but kept moving by walking and doing low impact exercises. These lifestyle changes had profound results. For the first time in years, she wanted to be around people again, she smiled and laughed more, and after about a decade without having a natural monthly cycle, that returned too.

After maintaining these changes for two years, her body had made significant progress, but she knew she still had not achieved optimal health. She had run out of resources. She decided to pursue certification as a Nutritional Therapy Practitioner (NTP) through the Nutritional Therapy Association. In the NTP program, Joelle learned how the systems of the body work and techniques to use foods and supplementation to restore health. These methods filled in the final missing pieces for her own health. In fact, she is now the mother of a healthy baby girl.

Joelle is excited to join DuPage Family Wellness to use the passion and knowledge that she has gained over the last several years to help you achieve your goals.

Joelle is a Nutritional Therapy Practitioner (NTP), certified by the Nutritional Therapy Association. She also has a Bachelor of Science in Food Science & Human Nutrition (BS-FSHN) from the University of Illinois. When she is not researching nutrition or cooking, she loves hanging out with her husband and puppy and attempting to be an urban farmer with backyard chickens and bees.